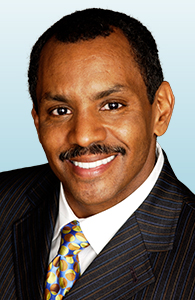 Dr. Remus E. Wright has a tremendous passion for God’s word coupled with a love for God’s people. He has a contagious spirit of generosity that flows through every facet of his ministry. Having received his mandate from God, Pastor Wright, obediently fulfills his calling as Senior Pastor of The Fountain of Praise.

Called to ministry in 1983, under the leadership of Bishop Morris E. Golder, Pastor Wright began his ministry as an evangelist and a singer, sharing the gospel in cities throughout the nation. In 1991, he was called to the pastorate of South Post Oak Baptist Church, a historical beacon in Houston for over forty years.

In 2000, the church adopted the name, The Fountain of Praise, a name that fully characterizes the spirit of the congregation. Pastor Wright has seen the fulfillment of Ephesians 3:20 in his life – “Now unto him that is able to do exceeding abundantly above all that we ask or think, according to the power that worketh in us.” Beginning with 150 members in 1991, membership at The Fountain of Praise now exceeds 24,700. In two capacity-filled services each Sunday, Pastor Wright and his anointed leadership team ministers to the needs of the community. With over 100 active ministries, The Fountain of Praise is making a difference in the lives of its parishioners and the community. Pastor Wright and his wife, Co-Pastor Mia Wright, are an anointed duo that God is using to make a change in the lives of people.

His vision is uncompromisingly clear, with one central principle; to build and develop a kingdom of empowered people for God. Holding firmly to the commissioned mandate in Matthew 28:18-20, “Go ye therefore, and teach all nations”, Pastor Wright has taken the gospel into national and international communities of the world. As an active participant in both foreign and local missions, he was instrumental in establishing three churches in Zimbabwe, while supporting The Fountain of Praise in Nigeria, The Fountain of Praise in Cachoeira, Bahia, Brazil and local churches in Houston.

Pastor Wright received his Master of Divinity degree in Biblical Languages from Southwestern Baptist Theological Seminary and his Bachelor of Arts degree in Religious Studies and Business Marketing from Martin Center University in Indianapolis, Indiana. He is an active participant in the Harvard University Summer Leadership Institute Program for Economic Development through which he has been certified as a developer of   faith-based community development programs. He has served on the boards of Madison High School Community Relations and the Westland YMCA. Pastor Wright also serves as a Spiritual Advisor to the Fort Bend County Sheriff’s Department, as well as many entertainers and professional athletes.

In April 2007, The Fountain of Praise purchased a 153,000 square foot facility on 14.5 acres that will provide opportunities to grow and develop new ministries, programs and partnerships. The FountainLife Center, is the second of two campuses that includes the Worship Center on Hillcroft Avenue.

In 2008, Pastor Wright was invited to present at the Oxford Round Table at the University of Oxford in England. His presentation, Hip Hop and The Church: A Clash Between Religion and Secularism? Or An Opportunity to Bridge the Gap sparked thoughtful discussion among religious leaders from across the globe.

Dr. Wright received his Doctorate of Divinity degree from Martin University in Indianapolis, Indiana in May 2015.

Pastor Wright and his wife Co-Pastor Mia K. Wright, are a dynamic ministry team, they are dedicated servants of God, working together to make The Fountain of Praise -“A Place of Refreshing.”